The last time I went to Lou, I was not done up. I had lost track of time and when Amy arrived to pick me up, I had barely gotten ready to go out. So I threw on clothes, grabbed a purse and left. We were only supposedly going to see the new Chase baby. I got in her car and said, “Baby Alton will love Aunt Jordan sans make-up, right? So let’s just go.”

After an hour of playing with the 5 day old and asking the new parentals, “Are you pronouncing his name “ALL”ton like the road in Miami or “Al”ton like the dude from The Food Network, and getting the response, “Oh… we’re pronouncing it “All”ton, like Alton Brown from The Food Network, and me saying. “No you’re not, but got it,” we decided we were ready for the adult portion of the evening. No. Not a strip club, just no baby. I was coming off of the master cleanse and was SUPPOSED to be limited on what I reintroduced to my system, but this is always a big FAIL for mama. I rock at the cleanse. I suck at coming off it. So when Amy and Jon said. “Let’s go to Lou!” there wasn’t much in me to protest.

As soon as we walked in, there were waivers and cameras flying in our faces. Apparently, The Travel Channel was doing a program on bacon and was filming the Lou segment to feature the Pig Candy. Of course, we wound up being interviewed to attest its glory. Even not-veg-but-not-pork-atarian Amy took a bite for TV. And, if we’ve all been following, I’d now been filmed for cable, adorned with zero make-up. So, I’m not the vainest vulture in the woods, but I would have preferred to at least have mascara on… The episode will air in November. Stay tuned.

As soon as I walked in tonight, I got greeted by the entire staff. “Oh, hi, Jordan! You have make-up on tonight!!!”

“Thanks for noticing guys, I’ll have a glass of your jammiest.”

Jord and Laners at Lou 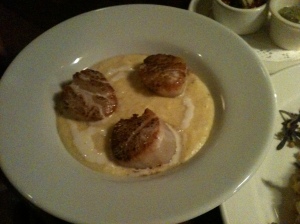