My favorite time of day is called “The Magic Hour,” (aka The Golden Hour for its photographic offerings). It’s the hour right before sunset (so about the last hour of daylight.) The sun is low and lights up the air with warm orange tones. I originally thought of calling it “The Laughternoon” because it was the late-afternoon (well, in January at least), but it seemed like a misnomer to me. For although it brings on a natural high, it’s not really a giddy high. It’s more peaceful and beautiful. I think I’m going to take a picture for a photo journal every day during this time. (We’ll see how I do with that one…)
Yesterday I wound up on the beach just south of the Santa Monica Pier during The Magic Hour. We were setting up for this season’s final Thursday Night Twilight Dance Series with New Orleans legend Dr. John headlining. A few tapestries, sheets, and blankets spread out on the beach, plus a bunch of surrounding votive candles in sand filled paper bags created our little lantern village.

Setting up "Lantern Village" at the pier.

I had made a stop at Bay Cities Italian Deli, a Los Angeles landmark. I had a friend in from NY that was joining us. Any time I have an out of towner visiting I usually insist that they don’t leave with out having a Bay Cities sammie (or In N Out, but who’s still late for the train on that one?) The go-to order is The Godmother. If I’m “watching my figure” I’ll go with a turkey. But as my friend Mike’s declared, “I’d eat a turd sandwich on THAT bread!” You really can’t go wrong. As a pseudo bi-coastal girl, I often am faced with the “Which city do you like better?” question (NY vs. LA), which I staunchly refuse to answer. But I’m compiling a list of assets for each. It’s a pretty well balanced list. Bay Cities = Advantage LA. 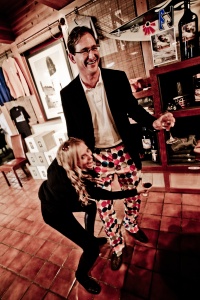 I was not the only one to try this!

While I was browsing the deli aisles, I also grabbed a bottle of the Point Break red blend from Longboard Vineyards. This was our one stop the last time I was up in Sonoma for my friend Megan’s 30th bday dinner at Cyrus. The winery is owned by surfers and their tastings are a blast. A fellow taster was a man donned in polka dot trousers. One Cabernet in and I, of course, was asking if I could play Twister on his pants. We also were making friends with the staff, naming the Syrah “The Jewish” one… because it had a big nose, etc. Not surprisingly, our whole party didn’t even make it through the caviar course at dinner. We thankfully had the rental van parked right outside on North St. for him to snooze in. Clearly, this was the bottle I was choosing from the Bay Cities selection.

Whit also brought fixings for Vietnamese Bahn Mi Sandwiches. I went to visit some other friends and hang with their kids when he broke out the cilantro.

3 thoughts on “Bay Cities, Longboard Red, and Dr. John at the Pier”

Join 2,908 other followers
Subscribe to Oxtails, Cocktails, and Rock Tales by Feedburner Email