The other day I got a call from my mother.
“What the eff game did you send Dad for the iPhone? He’s obsessed with it, he plays it all day long (pronouned oohwall day loo-wong).”
“Oh, I sent him an invite to play Words With Friends – Scrabble for iPhone, but he hasn’t accepted my game request, is he just playing with strangers?”
“He’s playing with strangers All Day Long!!”
So I sent my dad another request now that he had downloaded the software.
He accepts the game and sends me a message “No Mercy!”
Today we were discussing where to to for dinner when I get into town on Wednesday for a belated bday celebration for my dad. He wanted to go to Del Posto but couldn’t get in.
I told him to pick another restaurant and went to go turn the ALCS Game 3 on.
He goes, “OK, but what happened to that scrabble game we had going?”
I said I was busy with football yesterday but will make a move later.
“You’re leaving me too many open spots, Jordan!”
“I’m still winning, Dad.”
“Yeah, we’ll see!”
He decided on a repeat restaurant, Mas.
The last time we were at Mas was for its soft opening. My dear high school friend’s brother is part owner and we all got a table during the debut evening. We noticed a man at a neighboring table with a bottle of Sine Qua Non Ox (their 1999 pinot noir) and ooh and aahed over it. Apparently he caught wind of this and we were soon greeted with three glasses of the stuff. I all but sat on his lap in thanks. This time we brought our own, along with the 98 vintage – Veiled.
I surprisingly liked the Veiled better…
While the Veiled was my favorite part of the wine portion of the evening, one of the highlights of the conversation was the followng:
I was discussing how I had quite a few friends going through separations and I heard from someone who majored in Sociology, that studies show the hardest years of marriage to get past are 4, 7, and 24.
“24!!!” both of my parents screamed out in unison agreement.
“24-40!” they added.
Happy Birthday, Dad! 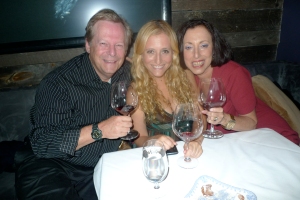 Join 2,908 other followers
Subscribe to Oxtails, Cocktails, and Rock Tales by Feedburner Email