Tonight was Herbie Hancock‘s 70th bday. Minutes before hearing this news I had turned to Beansie and said, “Man, Herbie’s looking good!”
“How old is he?” asked Beansie.
“I don’t know, but he’s basically looked the same for the past thirty years.”
“I want a sip of whatever water he’s drinking!” soon became my facebook status.
The show was great. His first set was more acoustic, straight up jazz, with an all-star line-up: Wayne Shorter on sax, Terence Blanchard on trumpet, Esperanza Spalding on bass, and Jack DeJohnette on drums. (And Nathan East on bass for a hot minute).
The second set was his funkier, electric stuff mixed with “The Imagine Project” (Band members: Vinnie Colaiuta – drums, Lionel Loueke – guitar, Pino Palladino – bass, Greg Phillinganes – vocals/keys, and Kristina Train – vocals).
Kristina Train, (aka “Chihuahua Hands” because it looked like she was petting a small dog with her left while she sung… distracting, but if you looked elsewhere she sounded pretty good. Just grab the mic with your left, K. Train!), belted through renditions of John Lennon’s Imagine, Peter Gabriel’s Don’t Give Up (which I sang all the way home), and Bob Dylan’s Times Are a Changin (with Lisa Hannigan on vocals – sounds Irish, looks Asian).
Other guests included India.Arie on vocals for “Imagine,”
Zakir Hussain on tabla and Niladri Kumar on sitar on “The Song Goes On,” (apparently with a pre-recorded vocal track by K.S. Chithra. We were wondering who else was singing…),
Juanes on vocals for “La Tierra” (Laney’s dad’s favorite Columbian),
Susan Tedeschi on vocals (can we say “girl crush”!?!?) and Derek Trucks on slide guitar on “Space Captain.”
And little Paulinho da Costa on percussion trading licks with Herbie during “Watermelon Man” (my mother’s personal fave of Herbie’s). He’s adorable. We must rival each other in height. Though the perspective up in our section is skewed. “Please tell me that’s a child,” I asked of the center dancer in the Debbie Allen Dance Academy “Tatamant/Tilay/Exodus” number. (Yes, yes it is, Jordan.)
The dirtiest piece was the second song of the second set (right after “Imagine”) but for the life of me I can’t get a song title. What good am I?

Now, three out of four times at the Bowl this summer I wound up in hysterics (and the show that didn’t get me was the night before I woke up with a man-down for four days cold). None of them are P.C.; I’m a terrible person.
At the BBKing/Buddy Guy show there was an African American lady, drunken stuporly screaming her conversation through out the show. At one point she turned around and yelled, “Anyone want some BLACK EYED PEAS?!?!” I lost it.
At the Nevilles, I commented Aaron’s chorizo on his forehead and Laners nearly choked on her own oxygen.
Tonight, we wanted to commemorate the final Jazz Wednesday Bowl evening with a group shot and Laners picked the only breathing man in the city who has never operated a camera to take on the task. He tried taking the picture twice, FAIL on both. We found another girl to try; she turned to him and said, “Ya, you’re holding the camera upside-down, dude.” I have little self-control when it comes to the giggles. Laughed right in his face.
(Similar to the time I took a pic for the lovely gay couple coming out of Alice Water’s Chez Pannise in Berkeley and we went to look to see how it came out, and one of the guys accidentally pressed “back,” and up pops a fully frontal, FULLY nude, sprawled out on the bed, picture of him. DIED! Embarrassed Showmance Will.)

Thank you Hollywood Bowl for our Summer Wednesdays!!! 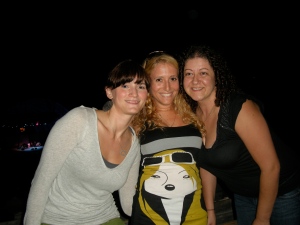 Join 2,908 other subscribers
Subscribe to Oxtails, Cocktails, and Rock Tales by Feedburner Email