The Masa bar meal we ventured out to for my mother’s bday last night had such a shamefully laughable incident, it’s just too good to keep to ourselves. 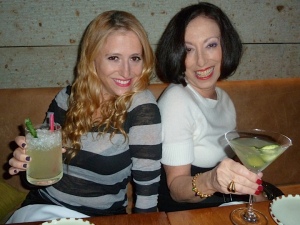 Our meal started out nicely. We were paying through the nose for deliciously concocted cocktails and well executed sushi, as expected. The sweet shrimp with uni sotomaki was my personal fave. My $25 cocktails were fantastic. I had been toying with the idea of concocting a shiso mojito and they had one here which validated my bar mixing instincts. But their Mikan Agave – don julio 1942 tequila, sudachi (a Japanese lime relative), and fresh Japanese tangerine juice took the prize. My dad and I could have thrown back six of them each.
Incidentally, we ordered one dish that was tricky. The seared kobe – medium rare. It came out well done on the ends and medium in the middle. At $70 for the appetizer, we assumed the kitchen would want it to come out as we’d like. The waiter asked how it looked, we said it was a little overdone, he said, “I’ll send it back.” Not a problem.
Two minutes later, this frazzled pipsqueak of a man who called himself a manger said he just wanted to “sort out what the problem was, because the ends are always more done than the middle.” We said, make the ends less done and the middle less done than this. (and thanks for the lesson and attitude?) He kept making it a problem. My mother was already fully annoyed that we were bothered and argued with, and with no apology. Most restaurants of that caliber would have been embarrassed that the well done meat was sent out to begin with. Plus the manager was agitated, rude, and condescending. Not good to expose to the customers.
Then it got even better. The manager returns about five minutes later and says, “Chef says you should order something else. He doesn’t think he can cook it to your liking.”
I said, “If this is medium rare, just make us one, rare please.”
He argued. He mocked my shocked face. I just repeatedly suggested to bring us one that was rare.
Ten minutes later it came out perfectly. Hassle unnecessary?
How shameful and embarrassing on Masa’s part. (though my mother will add “no candle in the dessert we paid $30 for” to the chiding list.)

One thought on “Pasa on Bar Masa – Amateur Hour”